Occupational safety, sustainability and inclusion in the Provinzial kitchen 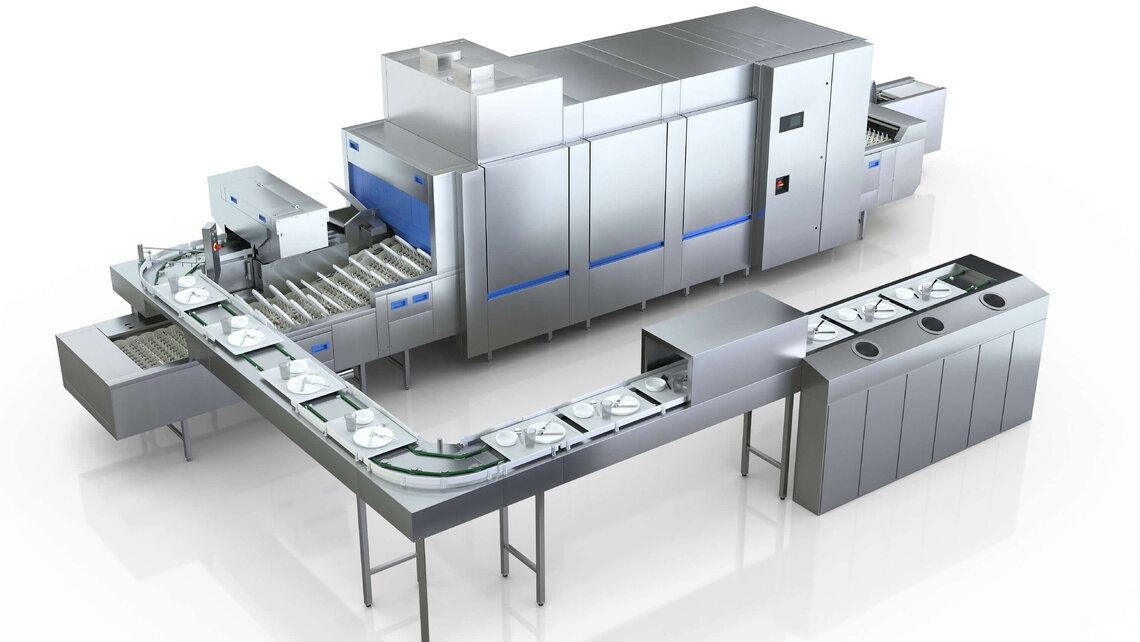 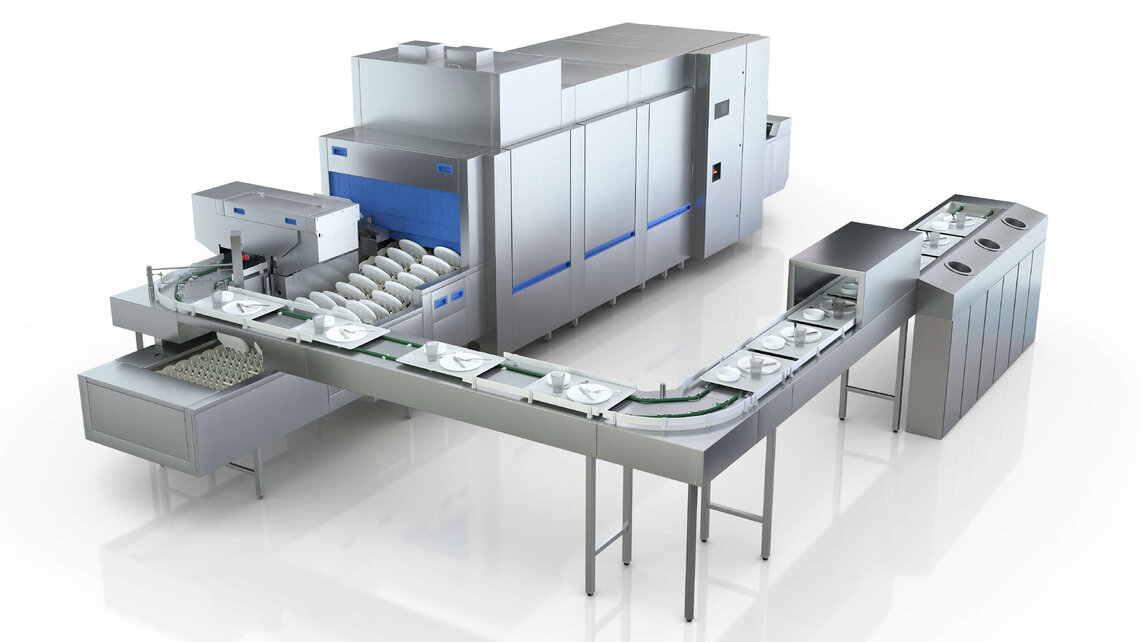 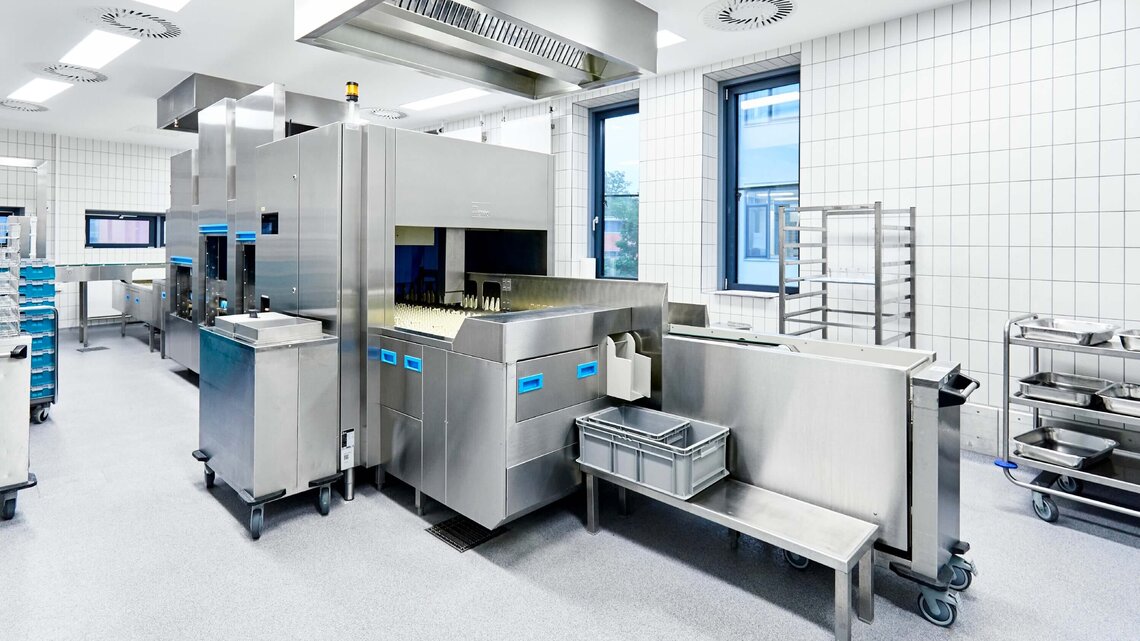 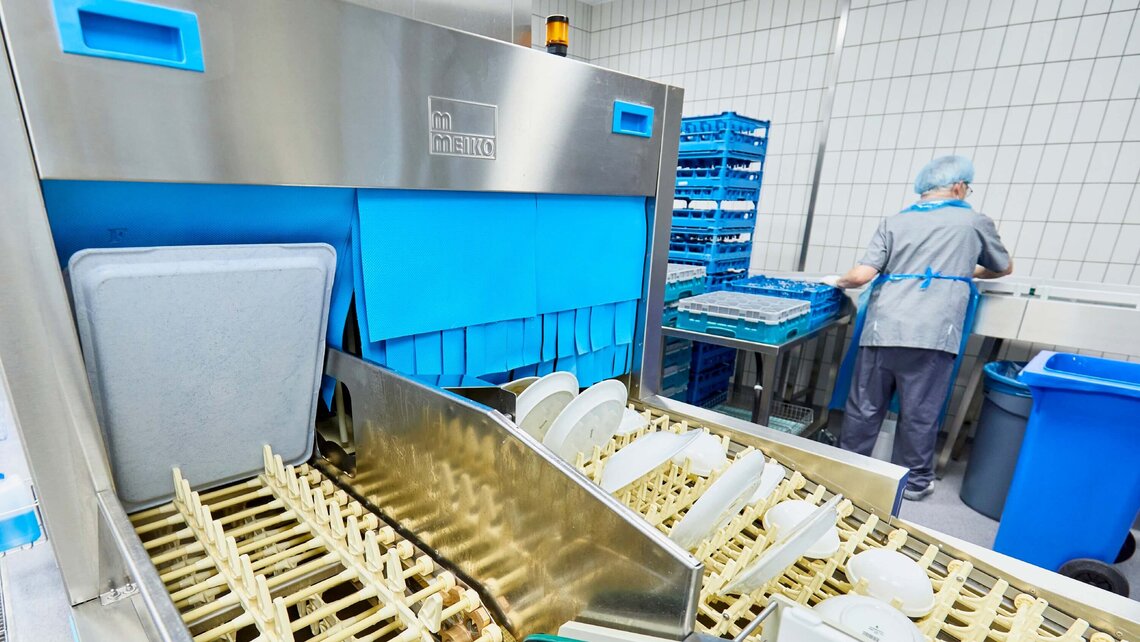 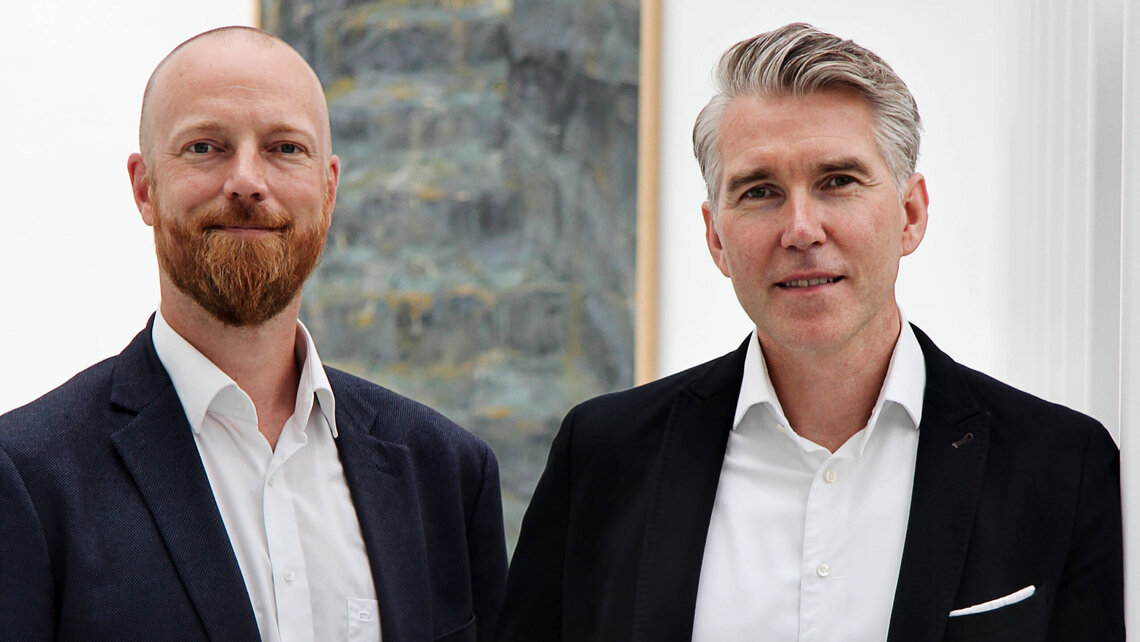 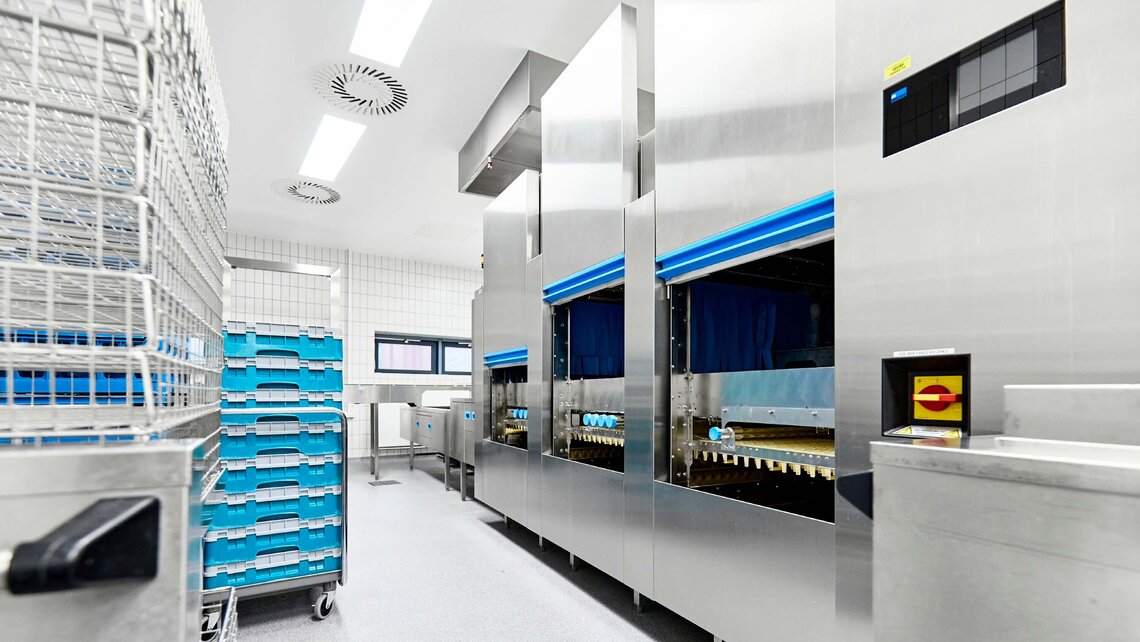 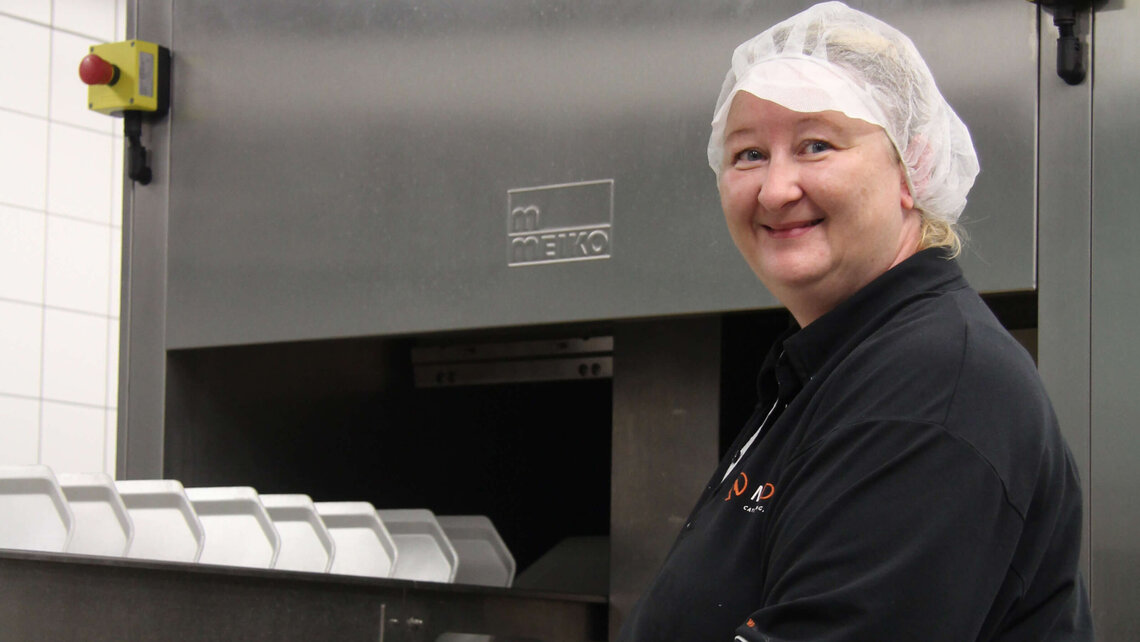 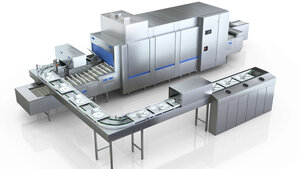 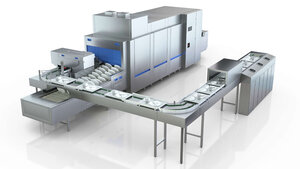 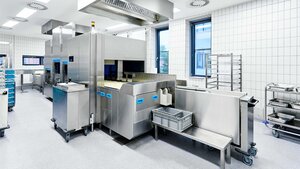 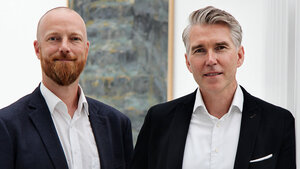 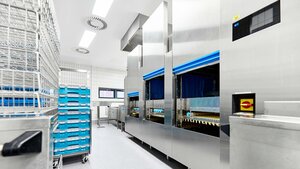 It's better to have insurance and not need it, than to need it and not have it. We’re reminded of that fact every single day when emergencies happen around the world: An insurance policy can help prevent losses and save people’s livelihoods – and insurers such as Provinzial know that customers are banking on them to offer a more secure future. With a million customers and a network of more than 1,300 agents, Provinzial is one of the biggest insurance companies in Germany. The Provinzial Group even includes the world's oldest surviving insurance company in the form of the Hamburger Feuerkasse, which was set up in 1676 to provide coverage against fire and other risks.

Nowadays, the company's headquarters at Provinzial-Allee 1 in the German city of Münster continues to set standards for the future by showing how to successfully combine a sustainable business with disability inclusion. The success of this model is particularly evident in the kitchen's dishwashing area, where hard work and time pressure are the name of the game. This is the kind of environment where occupational health and safety is a top priority, especially if you are an insurance company! For the past decade, Provinzial has staffed this area with a motivated team of people with disabilities – and this positive combination of equal opportunities and reliable technology has proved to be the perfect recipe for success.

Taking communal catering to the next level

The positive team spirit is evident from the moment the workers arrive at the dishwashing area early each morning. There's a friendly feeling in the air as colleagues greet each other. 'We'll be getting our first deliveries of fresh, regional produce for today's meals at about 6:30 a.m.,' says Ville Lammi on this particular morning. Originally from Finland, Lammi has worked at Provinzial for 11 years. In his role as division manager, he oversees the services provided at all the Group's locations. Before taking the elevator to the dishwashing area, we strolled past a spacious bike storage area, on-site gym, and staff bowling alley. But the moment we enter the kitchen, this highly qualified chef switches his focus firmly to food. His priorities include regional suppliers, organic and fair trade products, food waste tracking, a dedicated food waste treatment system, energy-saving appliances, takeaway meals, and Green Table membership. His strategy is backed by a long and varied career that has included setting up restaurants in Helsinki, running a gourmet restaurant on Majorca, organising events right across Germany for an event catering company, working as a freelance event caterer for customers in Europe and Bahrain, and managing his own restaurant and cooking academy. For the past 11 years, he has ploughed all this experience into Provinzial's communal catering services.

This diverse experience has been a bonus for his employer, especially now that flexibility has become such a top priority. 'Before the COVID-19 pandemic, we would typically serve around 1,400 meals a day in Münster, but the post-pandemic home-working arrangements led to some major changes,' says Lammi. René Köcher, a food service professional who runs the staff restaurant, has witnessed those changes first-hand: 'We're currently operating at between 60 and 70 percent of our previous capacity.' And juggling the number of expected meals each day is only one of the challenges Köcher faces: 'Grocery and ingredient prices are rising, delivery problems are cropping up more and more frequently, and we're finding it harder and harder to fill our apprenticeships.' This goes to the heart of the business, because the Münster location has built an impressive reputation as a provider of on-the-job training. The kitchen's 30 full-time employees are assisted by six apprentices, two from each year of the three-year training program. 'They learn all the different facets of their profession in both theory and practice, from butchery to gourmet cuisine,' says Lammi. In 2019, these efforts were recognised by the Association of German Chefs (VKD), which presented the location with an award for the "training enterprise of the year in communal catering" (Ausbildungsbetrieb des Jahres in der GV). Apprentice Lovis Wagner has even made it onto the German national team for culinary competitions.

Thanks to these combined efforts, day-to-day operations in the kitchen continue to run smoothly despite all the obstacles. Things start early, with some colleagues tucking into their breakfast as early as 7 a.m., and the pressure is really on at lunchtime, when all 600 seats in the cafeteria are taken. 'We offer four different set menus that include the first two courses plus fruit, salad, dessert and water, all at a subsidised price. We also offer a full set menu as a takeaway option, and we often have special events running on-site that increase our workload even more. But we always maintain our focus on quality,' says Köcher.

Inclusion, staffing levels and operating costs: an investment that pays off

With each set menu requiring eight items of dishware, the dishwashing area is always busy as it does its best to respond to each day's fluctuating demand. For the past ten years, this particular wash-up team has been assembled and run by a local company that helps foster disability inclusion. The six team members have a range of different disabilities, but they all share an enthusiasm for their work and a professional approach to getting the job done. Kirstin Remmes has led the dishwashing area for nine years and refers to the team as "her family": "People with disabilities are not just 100 percent focused on every last detail – it's more like 150 percent!" Their outstanding teamwork was once again demonstrated during the recent kitchen renovations, which included the installation of new warewashing technology.

'The Meiko machines were still running perfectly after 15 years, but we were implementing new fire safety regulations and decided it was a good opportunity to make some changes. I quickly realised that we could solve a lot of the problems directly by combining multiple steps in a single machine,' says Lammi. The kitchen renovation was a major project that included changes to the floors, false ceilings, lighting, and fire dampers. 'Meiko was constantly on hand to help and kept in close touch with our architects and in-house technical team. Everything had to be properly coordinated, from the emergency evacuation routes to the fire safety and ergonomics standards. We set up temporary dishwashing operations in a container module while the technicians were disassembling our new machine, manoeuvring it into the wash-up area and putting it all back together.'

By combining the functions and features of the kitchen's two previous machines, the new M-iQ BlueFire machine can be operated by half the number of staff, which cuts costs. While the previous machines required up to four workers, the new model can get by with two. 'And it can even be operated by one person at a push,' says Remmes. The new machine is also cheaper to run, says Lammi: 'We've seen a significant drop in our energy and water consumption.' The head of the dishwashing area says her team had no problem adapting to the new set-up: 'The new machine is even easier to operate and clean. It only took a couple of days for people to get used to the new routine. The new configuration is quieter and gives the team more space to work. Ergonomics is particularly important in this team, and fortunately the design of the new system helps everyone adapt to their new role.' With more room to move, it's easier to divide up tasks and get the job done more efficiently.

Glassware as the yardstick – and energy from food waste

Staffing is kept to a minimum not only thanks to the all-in-one machine, but also the high level of automation: Trays enter the machine in an upright position, and a powerful magnet ensures all the cutlery is sent down a separate line. Everything runs completely automatically – including demagnetisation of the cutlery once it's on the right track. 'We take regular surface swabs to check that the whole environment is hygienic. The automated processes prevent any of the issues that could stem from operating errors, so we have no problems in this area,' says Köcher. And the washing results are equally impressive: 'We don't have a separate glasswasher, so we take our glasses as a yardstick of how well the machine is working – and they always look great!' he says. Remmes nods in agreement: 'The glasses come out sparklingly clean – even dried-on coffee and sauce residues are no match for this machine! Yet our use of chemicals has actually dropped thanks to the new compact detergent. We simply keep a stock of cartridges on hand that we can change ourselves without the help of a technician.'

Provinzial has also been running a food waste management system for around 15 years. All the food waste goes straight into two disposal chutes next to the conveyor belt, which makes everyone's work easier: 'I used to work in a hospital kitchen and it's great not having to drag bins around', says Remmes. The food waste and organic kitchen scraps thrown into the chutes are processed into a homogenous biomass and stored in a tank in the basement ready for collection. This Meiko Green food waste treatment system rounds off the Provinzial approach perfectly, and connecting it to the warewasher was easy since everything essentially came from the same supplier.

As we move into the afternoon, preparations get underway for a major event: The kitchen is hosting the dinner for an important horse show, so it's time for the dishwashing team to smoothly slip back into their efficient routine with their smart, all-in-one solution. They are fortunate to have an employer who understands that investing in intelligent technology benefits both the workforce and the environment while also being good for the bottom line. It's a sensible and practical way to prepare for the future – just as you would expect from an insurance company!